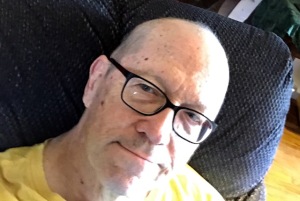 Like a molting cat, the fuzz and stray hair begins to return.

It’s been two weeks since my last update, one week-plus since I dropped one of my three antibiotics, and 97 days since my stem cell transplant for Non-Hodgkins Lymphoma.

So there are a few things to update and a few thoughts to share. Let’s start with the cancer. My team of oncologists at Franciscan’s Saint Francis Hospital on Indy’s southside gave me permission about a week and a half ago to drop one of the antibiotics I was taking that causes additional fatigue.

I have certainly noticed a difference. For the most part, I’m not having the nightly energy crash and burn naps that were ongoing since my treatment. That’s the biggest and most-welcome news since treatment ended.

I’ll see my oncology team in Indy monthly for awhile since we dropped one of three antibiotics. I’ll take that trade off.

My vision issue remains. I can’t see a surgeon until Aug. 9 which is frustrating but apparently eye surgeon is a busy medical field. My optometrist, who heads the residency program at the IU School of Optometry, believes removal could solve my sharpness issue. But like any good doctor he noted it might not.

I can see fine to go about daily life though things aren’t sharp. I really struggle being in front of a computer all day. I actually had two pretty decent days this week. But most afternoons its a difficult struggle.

So over the next few weeks I have a lot of decisions to make. Many of those decisions revolve around Aug. 9 and a discussion about those funky cataracts. There are way too many moving parts to my life right now but I’m trying to stay on top of things. I have moments but no reason to be negative.

Regardless of what I decide about my eyes and my work, I want to get my vision corrected. And the fact I have pre-mature cataracts also means they’re probably going to have to come out later any way.

There is one certainty in all of this uncertainty, I can’t go on spending 8 hours in front of a computer much longer without a fix.

I am within striking distance of the timeframe when I’ve always thought I’d retire to part-time wine sales or writing or even substitute teaching. I’ve prepared for it.

I just haven’t been prepared to have health issues make the final determination.

After most of my career in the newspaper business I joined higher education, working in Public Affairs. I write mostly about value wine. I have now taken early retirement and work part-time in a small boutique, retail wine shop in Indianapolis
View all posts by Howard →
This entry was posted in Uncategorized and tagged autologous stem cell transplant, Cancer, cancer hair loss, cancer recovery, chemo, Chemotherapy, fatigue, Lymphoma, Stem cell transplant, stem cells. Bookmark the permalink.